The National Talent Tour, Road to the Apollo in New York, seeks brilliantly gifted performers while raising funds to benefit North Carolina veterans. For the first time in history, auditions for the popular television show will be held in Bladen County at the community college.

One of the organisers, Captain Newborn, said: “Whatever talent they have, we’d love to see it.”

According to Newborn, anyone with talent is eligible to participate, and two rounds of auditions will take place at Bladen Community College. The winners of the second round of auditions at the local college will receive a trip to New York to perform at an amateur party at the Apollo.

The second round will be open to the public and recorded. The Talent Tour will take place November 13 at 6 p.m. at Bladen Community College.

“It will be filmed on location and televised to 42 million homes,” Newman said of the second Bladen County audition. Newborn explained that the winners of the second audition would move on to the next audition for Ametuer Night at the Apollo with travel and hotel expenses paid.

He added: “We accept all ages and all varieties of talents.” He listed talents such as singers, comedians, rappers, dancers, spoken word poets and bands.

The talent search is a fundraiser, according to Newborn. The cost of the audition is $10 and is non-refundable. Anyone under the age of 18 must have the consent of a guardian to audition.

During the second round of auditions, members of the TV audience will be entertained by the touring band, the Sandman, and models from the show. The audience will decide who moves on to the next round by voting with applause for the nominees. Limited advance tickets are available for $20 and tickets go on sale the night of the show November 13 for $25.

Proceeds from the event will be donated to help veterans with mental and medical needs. Sponsors of the event so far are Next Level Veterans and Kidz N Motion Child Care Center.

The BladenOnline team has contacted Apollo Theater representatives for a quote, but our team has not received a callback regarding the amateur event at the time of publication.

For more information on becoming a sponsor or selling tickets, contact 919-323-6920. 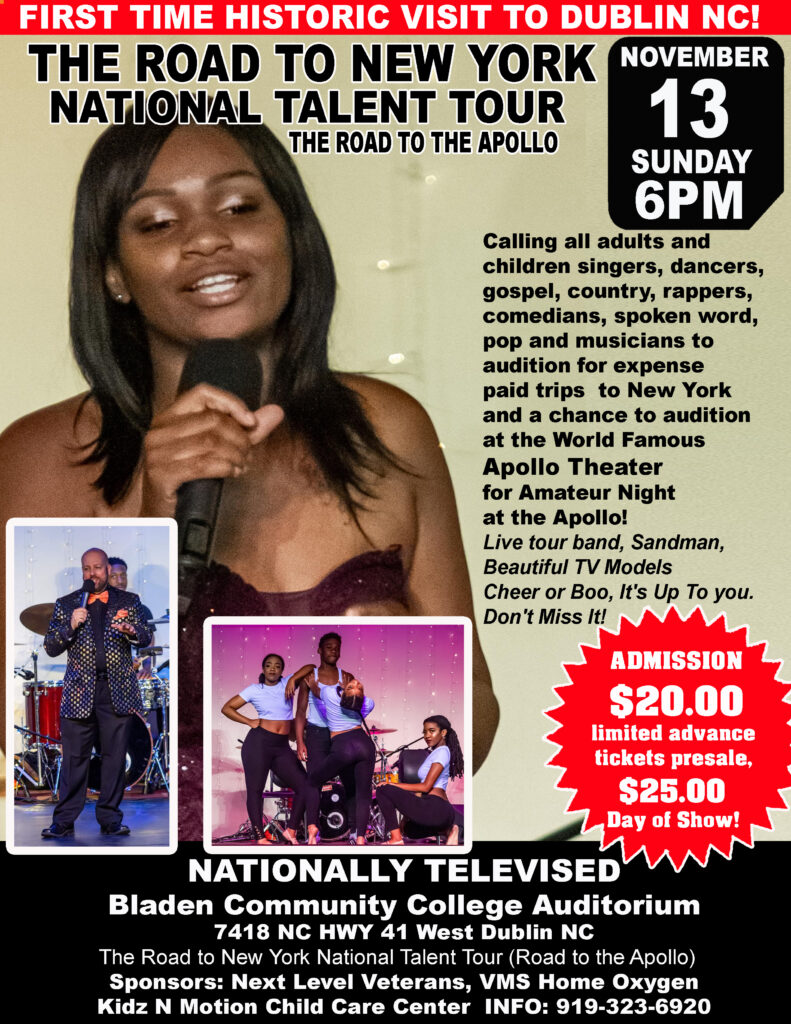