It is not easy to impress the members of the jury on the television show “The Voice of Germany”.

Yet that is precisely what happened when 27-year-old Syrian musician Mazen Mohsen performed a German folk song as part of a popular program. Mohsen chose a modern interpretation of the 19th century melody “Die Gedanken sind frei” (Thoughts are free).

The text was first published on political pamphlets around 1780 as a symbol of resistance against political oppression and an expression of a desire for freedom and independence. The lyrics were set to music only later and published by Hoffmann von Fallersleben in 1842 in the anthology “Schlesische Volkslieder” (Silesian folk songs).

Although the song is centuries old, its relevance is contemporary. A translation of the lyrics reads: “Thoughts are free, who can guess them?”

A story to tell

Adding a unique twist to the song, Mohsen woven a verse in Arabic, causing expressions of surprise on the faces of the judges. In this segment of the reality show, the judges hear only the voices of the singers. When a judge presses the buzzer, he can turn around to see the candidate who can then be part of his team of aspiring singers.

In Mohsen’s case, singer-songwriter Mark Forster hit the ringtone and expressed his pleasure with the song selection. “I’ve never heard anything like it here – a folk song. Somehow it got hold of me and totally touched me. You can tell you have something to say,” Forster said.

A performance with a message

Mohsen indeed has a lot to say.

In 2014, he fled the civil war in his homeland, crossing the sea in a rubber dinghy with his best friend. In the middle of the perilous journey, the small inflatable boat sank. “Within minutes we were all overboard,” he said in a biography posted on the show’s website. He still remembers the crying of the children and the desperate moans of his fellow travelers while they were in the water.

Fortunately, a Coast Guard ship suddenly appeared and he knew all was not lost. “They saved me,” Mohsen said.

He loves his life in Germany: “Here I can make my dreams come true. And I’m very happy that I made the trip and now landed on ‘The Voice of Germany’. My fate just brought me here. “ 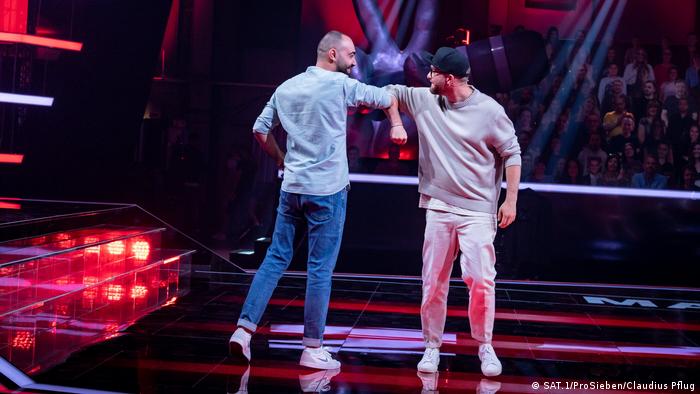 “Welcome to my team!” : Mark Forster to coach Mazen Mohsen

That Mohsen chose the folk tune “Thoughts Are Free” for the talent show is no coincidence. “The meaning that the song has for the whole world is very important to me,” he said. “Where I’m from I couldn’t just say what I was thinking, here I can.” He chose to sing a verse in Arabic so that his compatriots could understand the message. “I want to build a bridge between Germany and Syria with music,” he said.

During the show, Mohsen’s friends, who were sitting backstage, described him as a cheerful person who loves to laugh. In 2019, he received a Civil Courage Award when he saved two people from certain death. “As a guest in Germany, I want to show my gratitude and thank Germany for welcoming me and allowing me to live here in peace,” he said.

In Syria, Mohsen studied music and worked as a music teacher before fleeing. In addition to vocals, he also plays guitar and lute. For two years he has been working as a freelance musician. In Germany he worked on opera projects and sang with the Stuttgart Philharmonic Choir. His version of the folk song on “The Voice of Germany” is a 2015 modern variation written by Konstan Wecker.

This article was originally published in German.