The new season of the “Halloween Baking Championship” is unlike any other cooking competition already – because it comes with a blood, guts and gore warning label. Yes, Season 8 is all of the above, but, of course, in a surprisingly tasty and crunchy way.

“Warning: The following program contains blood, bones and brains depicted in a delicious manner. All baked goods involved in the making of this program are appallingly high in calories,” reads the alert pasted on a black screen. when the show opens.

The popular Food Network series (which also airs on discovery+) sees the return of host John Hanson as the caretaker of a haunted hotel, where 12 bakers must impress the judges, chef extraordinaire Stephanie Boswell, Carla Hall and Zac Young. If they fail, the bakers are forced to “check” and take the elevator to the mysterious 13th floor from where customers never return. A true “dead and breakfast”, as Hanson calls it.

“It doesn’t look like what I booked on Priceline,” said one contestant, walking up the hotel steps in the dark of night.

Yeah, it can get pretty gross — Boswell said of one dessert, “It’s so awful to look at in the coolest way” — but it’s not all “gross.” Each episode sees the judges don rather elaborate costumes to get into the Halloween spirit, with Hall teasing that this season they’re wearing everything from prosthetics to bald caps.

“We have a fantastic head of wardrobe, Susan Bourdeau,” Hall told TheWrap. “And the makeup artist, Tammy Dube. What they can do with so little. And the reason we like it is because it gives people ideas of things they can do without a lot of money, because we don’t have a big budget. 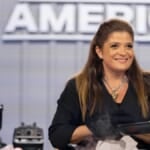 Hall is so in the mood that, she says, once she’s put on her costume, she’s in character. “You sell it. I mean, as soon as I, my, as soon as the last piece of my costume is put on, I don’t break until the makeup is removed. I never break. I a m this character. She proves it in the season premiere on September 12.

It looks fun for the audience because it’s fun for those on camera. “We are really friends. We call Halloween camp. We do things on the outside, which I think is really important,” said Hall, who knows the magic of an ensemble cast from working on ABC’s “The Chew” a few years ago. . “You have to work together and the audience can see if there’s any tension. So one of the things that — and I’m not saying I take it on myself — but I make sure that outside of work we do things together. We eat at the restaurant, we have a game night, we do something else. So when you see us on camera, it’s an extension of what we’ve done outside of work.

Oh, and yes, those scrumptious desserts. It’s sometimes too unpleasant to eat… but the judges have to do it. Hall, for example, wasn’t thrilled at the idea of ​​putting candy in her mouth that looked a little too much like a cockroach.

“Bugs. Yeah,” she said with a grimace. “So we, one year, they had a particularly scary thing they had to do. And one person was, it was a cockroach. Oh. And they had a hard chocolate shell with, uh, like loose liquid caramel inside so when you ate it, it oozed out. I could…I…I was just…” she stuttered. “I had such a hard time dissociating. Like the exoskeleton, you know, du, du, cockroach. It’s just…yeah.

A disgusting, yet incredibly delicious, chocolate-covered, oozing cockroach that makes the same crunchy sound as a real cockroach when stepped on is just the tip of the iceberg. As the seasons pass, desserts made by bakers seem to become more complex and creative, both in recipe and design, with the biggest growth spurt being the quality of home bakers, Hall said. And after each episode is filmed, you can bet there’s at least one request for a doggy bag.